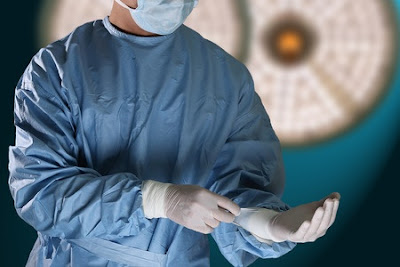 “Whatever I know, I owe solely to my assiduous reading of the books of the ancients, to my desire to understand them and to appropriate this science; then I have added the observation and experience of my whole life.”
(Abul-Qasim Khalaf Ibn Abbas al Zahrawi)

Rays of morning sunlight streamed over the rooftop canopy and struck an arched brown door embedded within a khaki stone wall. Standing in front, the master surgeon peeled an orange. He wore an ivory white thobe and matching turban and sported a neatly cropped black beard. Doctor Zahrawi grimaced as he swallowed the last sour orange segment.

Satisfied by the invisible benefits of the sun, he turned and faced the arched door to his medical clinic; the door creaked as he entered to start a new day.

“Walaykum as Salaam,” he responded with a kind smile and walked to his desk and sat down.

Zahrawi treasured his free time like a coin collector who cherishes a rare coin; if he wasn’t visiting patients, they were visiting him. But on this day he took advantage of this rare gift and buried himself in Razi’s The Comprehensive; a rash of patients with bone fractures peaked his interest in Razi’s views.

Loud shouts and a commotion outside pulled the doctor out of his trance. He glanced outside his window; the orange tree shadow had shrunk to half its size since morning. “Where did the time go?” he thought to himself.

The door burst open. Two men entered carrying a third man between them. His thick arms hung limply over their shoulders.

Dropping the white bed sheets Asad grabbed the patient’s ankles and guided them to a bed in the center of the room. The man flopped onto the bed. Holding his gut he curled up into the fetal position and moaned.

Zahrawi watched the drama unfold without flinching. He thanked Allah for the few hours he had to himself, exhaled and casually rose to perform his duty.

As he approached the bed, Zahrawi recognized the man and smiled while crossing his arms. In a deep voice he said, “Salman, you honor me with your presence again. What can I do for you today?”

Salman was a short stocky man and his gut typically hung over his belt. His grizzly beard and balding head suggested a man older than his forty years. His ears were slightly misaligned; one was higher than the other. Salman was a bachelor, an unassuming man and simple in his way. Zahrawi pitied him and treated him free of charge. He had many problems related to his weight and Zahrawi assumed today would be no different.

“I did everything you told me… I promise ….”

Grimacing in pain and turning red with embarrassment he whispered,

To Cut, or Not to Cut, that is the Question

Salman lay on his back stripped from the waist down and his wrists strapped to the bed. Using his hands, Zahrawi pressed his patient’s abdomen probing the bladder for any abnormalities using his fingers as eyes. He turned to Salman and said “I have some good news and some bad news. The good news is you don’t have any stones in your bladder. The bad news is you have a stone stuck in your urethra.”

Zahrawi ignored the question but Salman’s companion whispered in his ear. His face lit up with a goofy smile and his eyes gleamed like a child watching a clown. “Why would he use that word to describe my private parts?” he said to his companion. His clogged drainage system put pressure on his bladder preventing him from roaring out in laughter; instead he let out a weak cough: “cough… cough.”

Asad placed a tray of surgical instruments beside Zahrawi’s chair and the doctor selected his instrument of choice; a nasty looking steel drill that can pierce a man’s chest if placed in the wrong hands. He called it al - Mishaab and had designed it specifically for the type of condition Salman suffered from.


Zahrawi placed the Mishaab back in the tray as Salman watched in silent horror; however, he trusted Zahrawi because he had performed medical miracles on him in the past.

Zahrawi said nonchalantly, “I have invented a new procedure. If it works, you won’t feel a thing. If it doesn’t work, I will have to cut.”

Alarmed, Salman struggled against his restraints. “Noooo! Unstrap my hands, get me out of here!”

“Simpleton!” he mumbled under his breath.

“Relax Salman, everything will be fine.”

“But you said….” Salman began in a shrill voice then trailed into silence; a steely eyed Zahrawi placed his index finger over his lips.

Salman lay on the bed shivering with fear and unsure of what to do. His companions stood frozen like rabbits ready to bolt. Asad held a candle behind his teacher’s shoulder, focusing on the Master’s hands.

Zahrawi picked up the Mishaab from the tray and examined it under the candle light; a sharp triangular tip, like an arrow head, attached to a stainless steel wire whose thickness was no bigger than a metal coat hanger. He blew at the fine tip and with the precision of a seamstress threading a needle he slowly slipped the Mishaab into Salman’s urethra.

Wide eyed, Salman gulped in a quick breath and held it. His muscles tensed and he dug his fingers deep into the mattress but no sound came out of his mouth.

Searching for the stone in his mind’s eye Zahrawi gently pushed the Mishaab further while staring at the back wall past Salman; he could not see but he knew what he was looking for. He kept pushing the Mishaab until he hit a wall.

He repositioned the Mishaab and poked. Satisfied, he started turning the Mishaab clockwise, effectively drilling a hole through the middle of the stone.

Hot wax dripped off the candle in Asad’s hand and hardened as it dribbled down the side. Tense minutes passed as Zahrawi kept turning the Mishaab while staring at the back wall. Finally he stopped and looked down. He felt no resistance when he pushed the Mishaab forward; the Mishaab had successfully drilled through the stone.

He pulled the Mishaab back from the perforated stone then, using his fingers, pinched the man’s penis where the stone was lodged. Its remnants crumpled easily. He slowly pulled the Mishaab out then released his fingers. A dam burst open and urine gushed out as Salman’s bladder deflated like a balloon passing the crushed stone pieces along with it.

A geyser shot up from the bed just as Zahrawi moved off to the side. Nodding proudly at his handy work a smug smile of satisfaction spread across his face.

Hunched over and dejected, Asad stared at the mess forming on his white bed sheet.

Staring at the ceiling, Salman exhaled in relief and savored the moment.

1000 years later, with some modifications, modern medicine will call this procedure lithotripsy.

Abul-Qasim Khalaf Ibn Abbas al Zahrawi was born in the city of Medina al Azahara situated on the outskirts of Qurtuba, Andalusia (Cordoba, Spain). Known to Europe as Albucasis, he was a 10th century doctor and a renowned surgeon considered to be the father of modern surgery.

Very little is known about his life. The only record of his existence is a single hand written book titled al – Tasrif (The Method of Medicine or Liber Servitoris in Latin). It’s a 30 volume medical tome describing all aspects of medicine but it’s the last volumes on surgery that sets him apart from every other doctor up to the present time.

Some of the treatments he writes about include:

This is just a fraction of his writings and treatments in al – Tasrif.

Al – Tasrif greatly influenced the progress of medicine and surgery in Europe after it was translated into Latin by Gerard of Cremonia (1114–1187). The book became a standard text in European universities, and in some cases displaced Avicenna’s The Cannon of Medicine.

In later centuries, almost all European surgeons would refer to al –Tasrif and view Zahrawi as the father of modern surgery.

“Medical Sciences in the Islamic Civilization.” Muslim Heritage. May 20, 2015 <http://muslimheritage.com/article/medical-sciences-islamic-civilization#sec3>.